Aside from a couple of bug fixes, the iteration was spent working on new features.

Feature: Indicating what you're working on

You can now indicate to your team mates which card(s) you're working on.

If somebody else is working on a card that you want to pick up you can either join them (e.g. when pairing), or replace them. 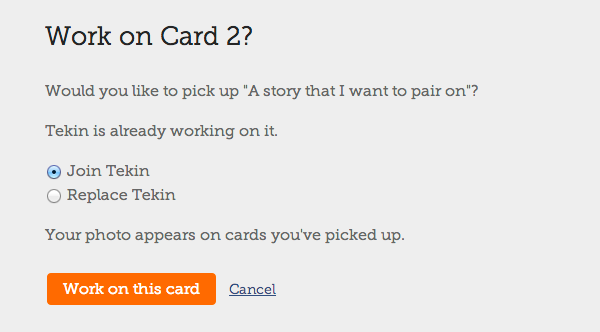 If you join the people who are already working on a card your face appears at the top of the card...

...and on the thumbnail on the Kanban board.

Once a card has been moved to the final column on the kanban board it's considered to be finished, so the avatars are removed.

You can now drag cards around on your tablets or mobile devices!

iPads and Android tablets are now especially useful in a planning session or standup, but I've still got some work to do on the CSS for phones. The site works on phones, but the responsive layout needs some more work.

Feature: Overview of the team's activity

There are some big new features coming up over the next few iterations that don't have an obvious home in the existing user interface. I really needed somewhere to collate information about what's happening across all the cards on a board, so I've added a new page to summarise what's going on.

Currently it only gives; 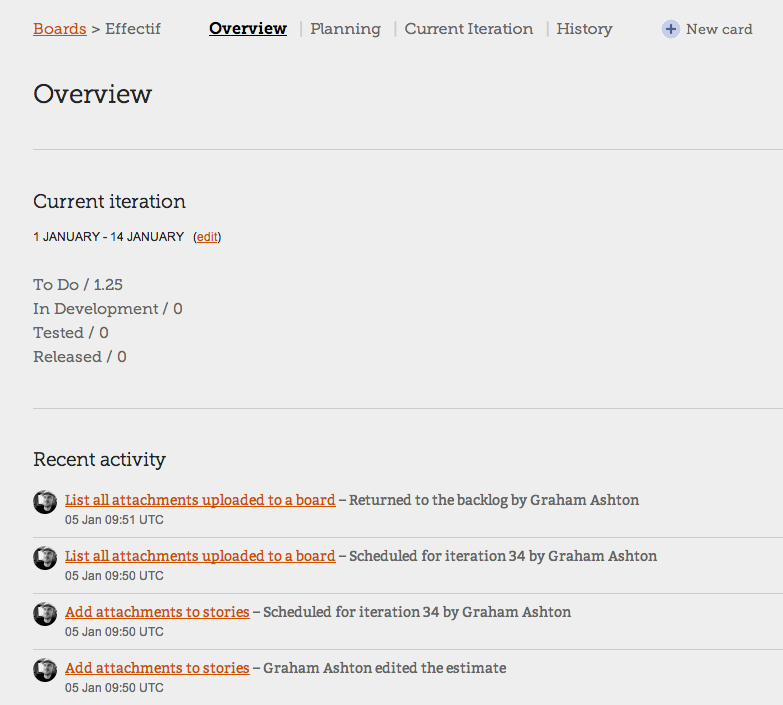 I've recently been delivering around 2.5 "points" worth of work per iteration, and I decided I'd aim for another 2.5 this iteration. I only completed 1.5, which is a measly 60% of my normal output.

Very disappointing! But what went wrong?

I bit off far more than I could chew. In addition to the features outlined above, I'd scheduled two fairly big stories:

With the benefit of hindsight, it's no wonder I didn't manage to fit them in. I'd significantly underestimated the complexity of uploading attachments to Amazon's S3 service, and had conveniently ignored the fact that Christmas was going to happen at the end of the iteration whether or not I was ready for it.

The iteration was scheduled to finish on Christmas Eve, and I was supposed to be having the family over for Christmas dinner. I hadn't bought any food, or Christmas presents, and hadn't left myself time for either. I also had three Christmas parties to attend in one week, which took a big toll on my productivity (I was hungover a lot).

Part way through the iteration it was quite clear that I wasn't going to finish everything, and I was in danger of making a right mess of Christmas. Rather than fail at work and Christmas, I shipped what I could, cut the iteration two days short and went Christmas shopping...