This iteration has seen a couple of important features ship; coloured stickers and search.

Teams that use index cards or sticky notes on their office wall often highlight different types of card (such as bugs, spikes, etc) by colour.

It makes it much easier to get an overview of the kind of work that's in your backlog, or on your card wall. 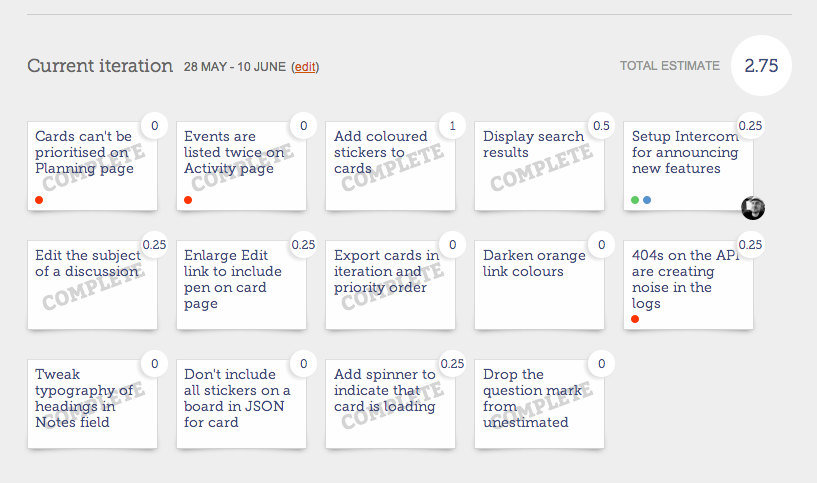 You can add/remove stickers while writing the card itself.

You can read some hints and tips on how you might use them on the sticker help page.

I've added a small form at the top of the page, for searching all the cards on a board. It'll search your board as you type, and return the top 10 best matches for your query. And it's fast.

The current implementation is pretty basic. Planner will look for cards containing any of the words you've entered and return up to 10.

They're sorted by the number of occurrences of the word anywhere on the card (the title, story, notes, name of the iteration, the card's number, etc). There's definitely plenty of scope for improving this.

To give you a flavour of what's coming up, I'd like to:

This has been a very interesting iteration. While I've been busy adding new features, I let a couple of new teams into the private beta to put Planner through its paces. I've had some great feedback, and discussions that have lead to a few exciting ideas that I'm hoping to turn into some neat new functionality.

In terms of how the development work has gone, I've shipped as much work as my estimates suggested I might. It's always nice to have a consistent velocity when people are asking you how soon the next bit of work will go live.

If you've been reading these retrospective posts as they come out, you might be wondering what happened to the write-ups for iterations 41 and 42.

There wasn't much of relevance to Planner to be said for iteration 41. I spent the first week on holiday, and the second week working on a couple of my open source projects that were long overdue some attention.

The majority of iteration 42 was spent learning the ins and outs of Elasticsearch (which is extremely impressive) and implementing the server-side components of the search system that I've been talking about above. While it was very interesting from a technical perspective, there wasn't much to say about Planner itself, so I skipped the write up.